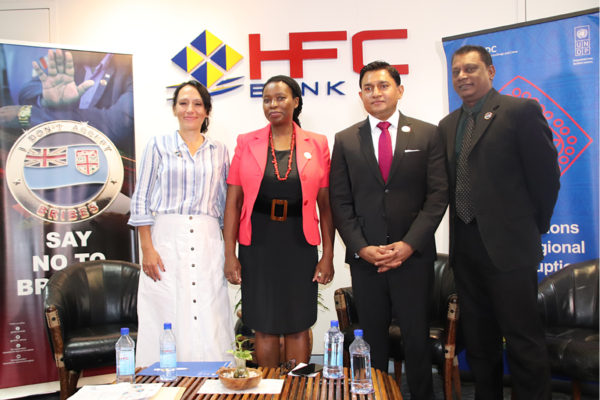 The expansion of the anti-bribery and integrity campaign to the business sector began this morning at HFC Bank in the presence of representatives from FICAC and UNDP, and senior management team from HFC Bank.
The launch together with the badging ceremony was significant as it demonstrates a high-level commitment from the CEO of HFC Bank and its senior management team in their unwavering support in the fight against accepting bribes and corruption from the banking sector.
HFC Bank CEO Rakesh Ram stated that he is pleased to join the fight against corruption and bribery. He is highly appreciative of the campaign with FICAC jointly with UNDP that aims to enhance the awareness, avoidance, and detection of such crimes. HFC Bank like any other banks in the world is also susceptible to crimes such as Money Laundering and Terrorism Financing. CEO Rakesh endorses that it is vital that we continue to partner and work closely with the relevant authorities to jointly combat such crimes in Fiji and ensures that staff are not to engage or entertain any corrupt practice.HFC Bank continues to enhance its policies and processes to strengthen its risk management and compliance culture. Following the launch today, all the Banks staff will continue to undergo a thorough anti-bribery training conducted by FICAC’s Corruption Prevention team.
In badging the CEO, FICAC Deputy Commissioner Mr Aslam thanked Mr Ram and his Management team for the auspicious occasion. Mr Aslam stated that it was indeed a privilege to have HFC Bank as the first private commercial entity to join the ‘I don’t accept bribes’ campaign supported by UN-PRAC’.
Mr Aslam encouraged the Management Team to continue to have the passion towards HFC Bank and align their mindsets to the values, mission and policies of the organisation.
The Deputy Commissioner highlighted that corruption is endemic and rampant everywhere and Fiji is no exception. Therefore it becomes important to bring more innovative different approaches to promote values such as integrity and honesty.
Mr Aslam stated that there is a need to address the issue of corruption with the younger generation, private sectors & commercial sectors in a preventative approach whereby integrity is being promoted as the fundamental principle when conducting business, engaging with the public service & all other aspects of life.
Mr Aslam further stated that bribery is the most difficult offence to detect and is the main contributor to corruption globally including Fiji. One of the misconceptions of bribery is that it is a victimless crime. However this is not the case. At the end of the day, if there is a bribery culture in any organisation, the final victim of that bribery is that institution itself & would therefore be perceived by the public as ‘you can’t get anything done unless you give money”.
Revai Makanje Aalbaek, UNDP Effective Governance Team Leader, in her remarks at the ceremony, said, “Private sector has a critical role to play in preventing drainage of resources caused by corruption and bringing them back to investments in important development outcomes for the people in Fiji.”
“The commitment of the private sector to embark on this collective journey is important also because of its alignment with the UN Global Compact principle 10 derived from the United Nations Convention against Corruption (UNCAC) which calls for businesses to work against corruption in all its forms, including extortion and bribery, ” added Ms Aalbaek.
The management and staff of HFC Bank will undergo ‘I don’t accept bribes’ awareness training sessions conducted by the Corruption Prevention department of FICAC, which will be extended to all branches around the country.
The Deputy Commissioner further stated that the principle theme behind the campaign is protecting Fiji and its economy by promoting the theme ‘I don’t accept bribes”. The Deputy Commissioner made reference to the launch with iTaukei Land Trust Board whereby the CEO of iTLTB Mr Tevita Kuruvakadua stated that the badge itself will act as a “silent handcuff” for those wanting to engage in a corrupt act.
The partnership between FICAC, UNDP and HFC Bank is an important one in enriching the anti-bribery and anti-corruption efforts driven by FICAC and UNDP.